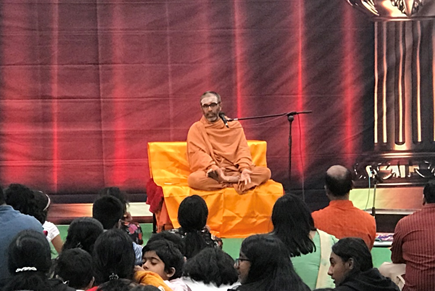 In June 2019, the National Council of Kerala Hindu Heritage UK led an event in which Hindus from all over the UK gathered in Leicester to spend a weekend of spiritual enlightenment and self-discovery with the honourable Swami Chidanandapuri. The course of the two days was filled with sensational teachings, entertaining anecdotes, and question-answer sessions with Swami, along with yoga classes, bhajans, and games. This personality development programme aimed to emulate life in an ashram, which was a completely new and eye-opening experience for those who attended. 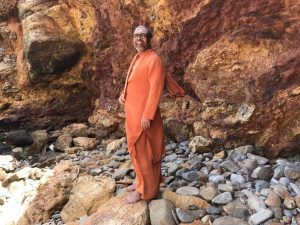 Speeches by the respectable Swamiji was the highlight of the programme, managing to capture all attention, of both children and adults alike. Various enlightening topics came into discussion such as how to properly convey respect towards our parents, why we worship many gods, and the importance our inner strength plays in combatting problems. However, an overarching theme that seemed to take hold in his messages was one of acceptance, love, and respect for all the wonderful creations of our universe. One of the first messages that Swami Chidanandapuri presented was “acceptance, not tolerance” towards other faiths, which I felt was an important message that is especially relevant to the society of today – a society riddled with massacre upon massacre and destruction in the name of religion. All manners of problems in the current world could be reduced, from climate change to suicide bombings, if only we learned to accept other fellow creatures and creations for their differences, and still love them. 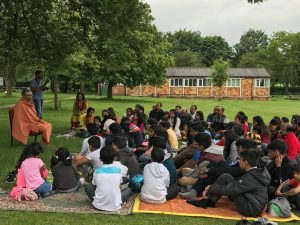 Amongst the pearls of wisdom that Swami bestowed upon us was the message that we should have pride for our long-reigning traditions and values that make up the Hindu belief system. The children were very intrigued when Swamiji talked about the intricately beautiful stone sculptures at Chidambaram temple, and the majestic ruins of the ancient village of Hampi. Swamiji explained that knowing our roots can help us realise the greatness of our ancestry and it is also key to elevating our self-worth as we have so much to be proud of. Following this, Swamiji also said something of equal importance – that respect with knowledge is always better than blind respect. He was invoking in us a sense of intellectual curiosity and telling us not to take things for granted but delve deeper and find its purpose and value. To do this, we should explore our world, learn about other civilisations, and appreciate our own glorious history, instead of becoming passive, idle individuals, like frogs in a well. 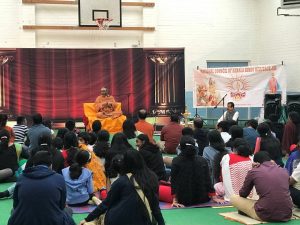 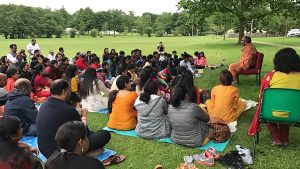 I would like to use this opportunity to thank the honourable Swami Chidanandapuri for coming from across the world to share his invaluable time with us, and for all the thought-provoking teachings he left with us. I would also like to thank NCKHH-UK for organising such a wonderful event that enabled all those who attended to grow in both knowledge and spirituality. 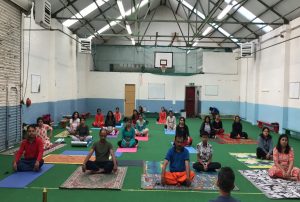 I will leave you with a quote from Swamiji himself, which again reinforces his message of love being an unconquerable power that can be wielded to create change – “Do not hate terrorists. Hate terrorism.”
To conclude, Swami Chidanandapuri’s messages of compassion towards fellow humans, respect towards family members, and his imploration to find gratitude and pride in our culture and heritage are extremely apt for today’s society. I hope everyone can take these words into heart and bring them to effect in their daily lives in order to lead more fulfilling, prosperous lives.